Hi, I'm Bonnie Bell, a writer who relentlessly explores the truth about God, human existence, and the realities of life to understand the reason Scripture reveals the word of God is like a sword when spoken in truth.

Through my bestselling books, | shares insights, strategies, stories, and tips that help people understand who God is. And the reason the greatest commandment of all is to love God with your entire heart. So unlike those of apostate faiths, we seek to please the Lord-God because we love him and don't feel it is a chore (work). 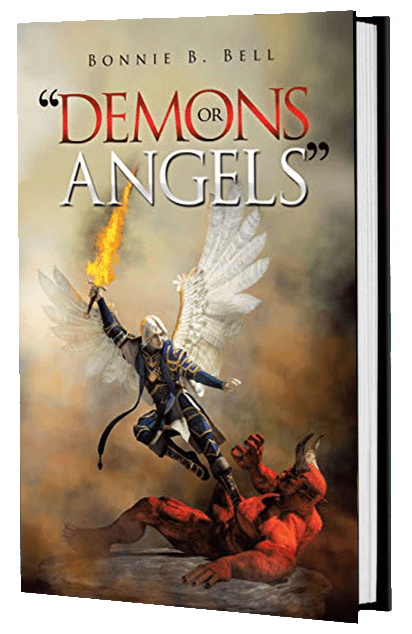 As a young girl, | had many emotional issues. Big for my age, it seemed everyone expected more from me. Or at least that is how I felt.

Having family problems at twelve years old, I became a chronic runaway. On one of those escapades, I was picked up by a man who dropped me off on skid row. And unknowingly, I was about to have my life turned upside down as I was left where all the prostitutes, drug addicts, and pimps hung out. None of which I was at that time

I must have looked hungry to Bobby when he met me; he offered to buy me dinner. I, of course, took him up on his offer.

I don't recall how old I told him I was, but I sure didn't tell him I was a runaway. Nonetheless, if I ran into a young person who didn't have a change of clothes, money, or anything, I'm sure I'd know something was amiss, as I'm sure Bobby did. In any case, he took me under his wing and | thought it was because he liked me.

I can't remember how long our romance lasted before the truth came out. Bobby wanted me to be a prostitute, and at first, I refused. As I mentioned, my family raised us with moral standards as a compass, even we weren't in a close-knit household.

Bobby said he would leave me if I didn't do as asked. I had no one I could turn to, so I gave in to his demands. He told me he loved me, and it was a way for us to get ahead. Starved for affection, I chose to believe his lies. Bobby also changed my name to Pat and directed me to call him daddy. He was twenty years older than me. I assumed he changed my name because we broke the law by me being a prostitute. But now realize it was to disguise who I was. If the law was looking for a runaway (I'm sure he had to have realized)

And Like any con artist, they wine dine and make you feel special. I was hungry for love and wanted to love someone and have them love me. For many reasons at home, I didn't feel I had that.

Eventually, my life turned into a living hell. If I didn't make enough money, Bobby would beat; if I turned a trick for too little, daddy, as I called him, assaulted me, and if I left him, he said he would kill me.

Prostitution is a dangerous lifestyle, and some guys will rape, rob, and kill you. I had friends missing after a date. Did the date kill her? Or had she managed to use that trick to get away from her pimp? Others had pimps worse than mine, and one by the name of Filmore Slim had a stable of many women. Rumor had it; one of his girls kept money back, he stabbed her in the back, after which he raped her with a bottle. I'm not sure if these stories were meant to maintain your obedience to your man or if these things happened.

All I knew was when girls went missing; you didn't know if they were dead by drugs, pimps, or their tricks. Were they able to escape? It was a way of life and a horrible one at that.

I don't know what changed my mind, but I guess I preferred to die when I turned eighteen years old than to be with Bobby, and I escaped. In the next few years, many things transpired, but I want to keep this explanation of my life short.

Even though I got away from Bobby, I didn't know how to take care of myself. I only had a seventh-grade education during that day, and the only profession I learned was that of a hooker. I found jobs as a go-go dancer, or at other times, I was a stripper, which I felt was a step up.

Still, on a quest to find love, I married four times. I wanted an everyday life, but it was elusive. I'd been down a rabbit hole so young and had seen so much, which caused me many problems. It was like Humpty dumpty had taken a fall, and nothing I could do would put my life back together.

I eventually moved from the United States and was living on the island of Guam.

When a day came, I heard that Jesus was supposed to return. Religion was not a part of my life, but I was amazed when I heard this story. How was he going to come back??

Then one-day early morning, I went to the military base to get a cup of coffee. Back then, we didn't have cafes in the villages. I was standing at the gate, waiting for a base taxi to take me to a restaurant. Standing at the guard station, the guard spotted a UFO. It was early dawn, and there was no mistaking what it was. Silver, round and red flashing lights came on. You couldn't tell if a cloud moved or if it merged into the cloud, but this was how it disappeared from view.

It was also during those days a book had come out called chariot of the gods. And this was when I found out that UFOs were mentioned in Scripture.

I purchased every Bible; there were a Bible concordance and a dictionary. Reading the Bible, I realized I was a fornicator even though I had to look that word up. I always thought of myself as a good person, as I never hurt anyone else on purpose. And a simple person, all I knew is I'd been in hell all my life, and I sure didn't want to end up in a worse place after I died.

Reading Scripture, I fell in love with Jesus and related to Mary Magdalene. And now, finally, I found someone who loved me.
I understood in Scripture Solomon had built a temple and asked the Lord if people turned to that temple, he would hear them. So turning to the Lord-Jesus, I decided to go to Solomons temple. Not having a formal education, I had no clue the temple Solomon built was no longer there.

In the meantime, other things had transpired. Nonetheless, I eventually traveled around the world and made it to Israel. Solomons temple had been destroyed years before. But because I had turned to the Lord even though the temple was gone, I believe I found the wisdom God gave to Solomon. Which is all documented in this little book.

Excerpt from Demons OR Angels

Christ knew the world, for the most part, would not accept his teachings. One day, Christ spoke to many in the synagogue, and when the religious heard what he had to say, they were filled with wrath. After which they rose, and thrust him out of the city, and led him unto the brow of the hills of the hill whereon their city was built, that they might cast him down Lk 4. On that day, many people were more worried about the deceitfulness of riches or what you eat and not what you stand for. Christ explained to flee such things. And told us to be of good cheer, if we were of the world, the world would love his own: but because we are not of the world, but he chose us out of the world Mt 15:9-12."

Christ said many things that they didn't accept, and once they crucified Christ, they also persecuted those who followed Christ's teachings. History plus many scriptures testify how in that day, those of the faith were held in prison, fed to lions, had their heads cut off, etc. People without conviction began to break down as they didn't want this same thing to happen. Others who sought people's affection changed Christ's words to say smooth things, and the falling away began to raise its ugly head in a mighty way.

All testified in Second Peter two. Those of apostate beliefs change many translations to say smooth things and have opened a wide gate. Even though Christ said, "strait is the gate, and narrow is the way, which led unto life, and few there be that find it." So, moving from the milk of God's Word, we will look at the deep things Christ taught; whereby, the apostles were also at times perplexed.

One of the disciples said unto him, "Why speakest thou unto them in parables?" Christ answered and said unto them, "Because it is given unto you to know the mysteries of the kingdom of heaven, but to them, it is not given.

For whosoever hath, to him shall be given, and he shall have more abundance: but whosoever hath not, from him shall be taken away even that he hath. Therefore, speak I to them in parables: because they seeing see not; and hearing they hear not, neither do they understand" Mt 13: 10-17. And because the falling away from the true faith was in progress when Revelation was penned, it had to be written in parables and in a cryptic fashion to hide it from these impostors.

And to enable you to understand the mysteries I am about to reveal, you have to realize God's timetable is not the same as ours. Most prophecies can take years, if not thousands of years, to fulfill. For example, people will read Matthew twenty-four. They think all the forecasts Christ mentioned would take place in a generation when the prophecies would take years to complete. So, what Christ meant was when the last prophecy was fulfilled, it would be the last generation, and the final prophecy to be fulfilled that Christ mentioned in Matthew twenty-four. If you can understand how God's timetable works, I will reveal what the Spirit says regarding Revelation.